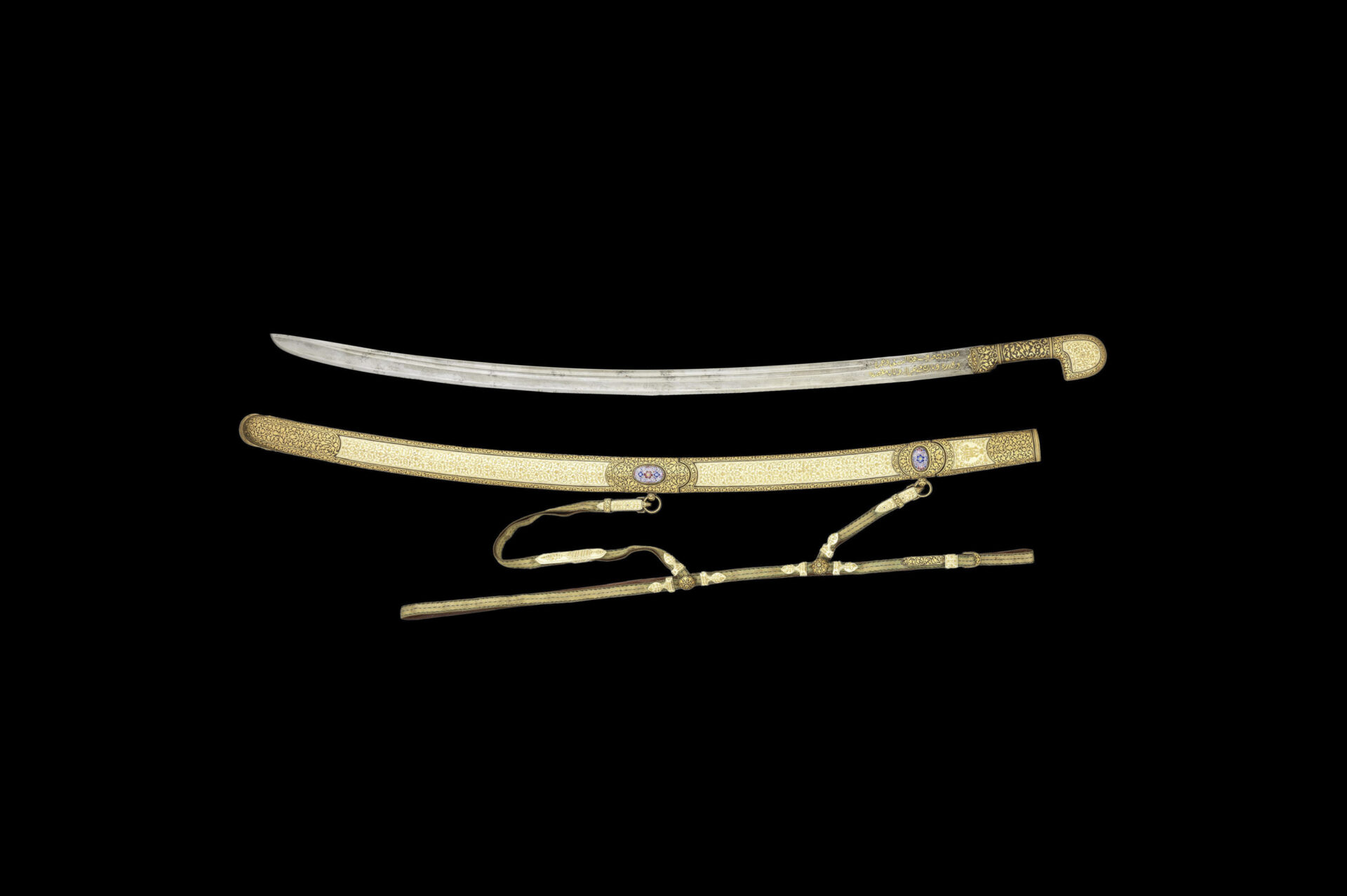 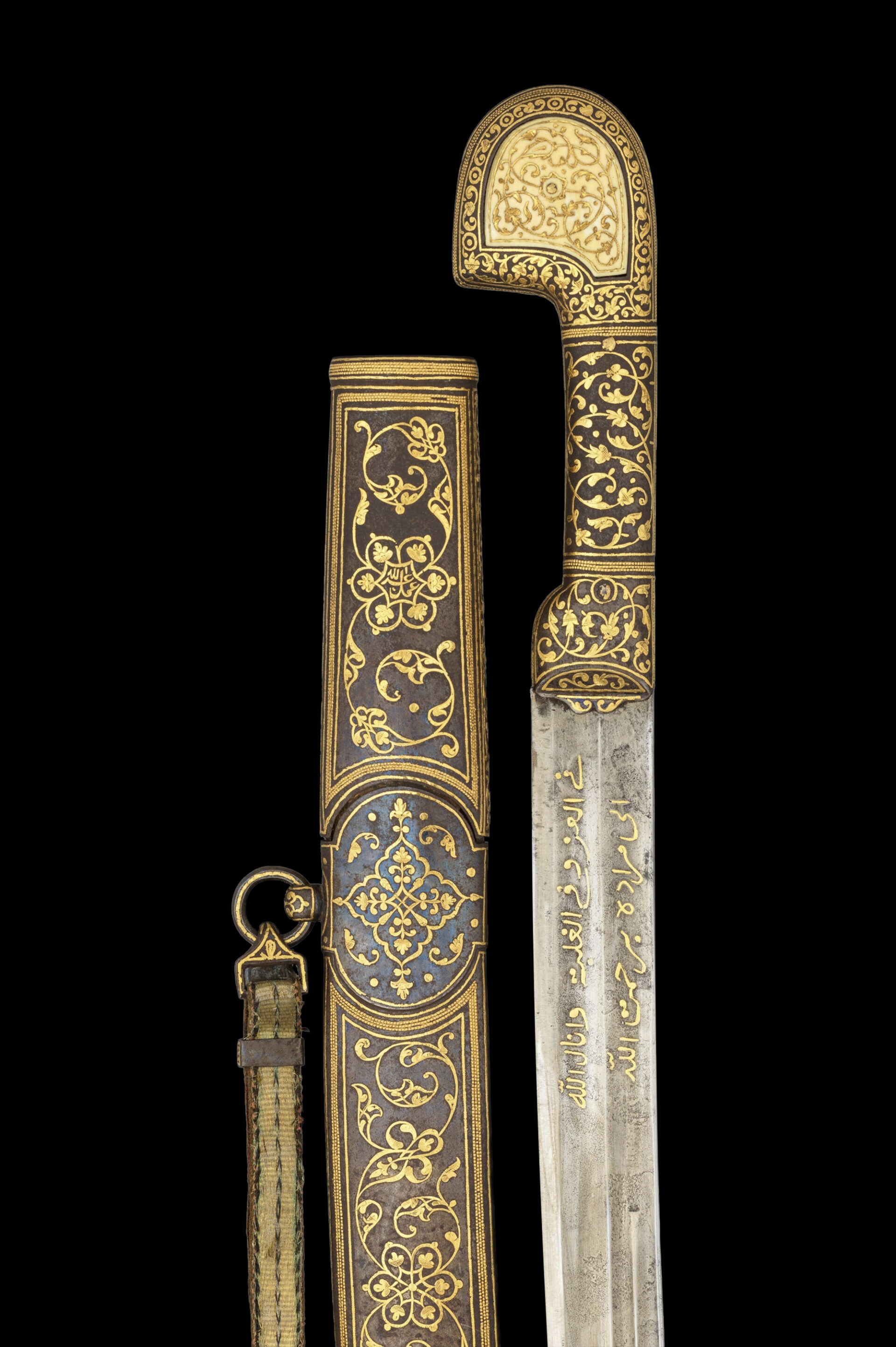 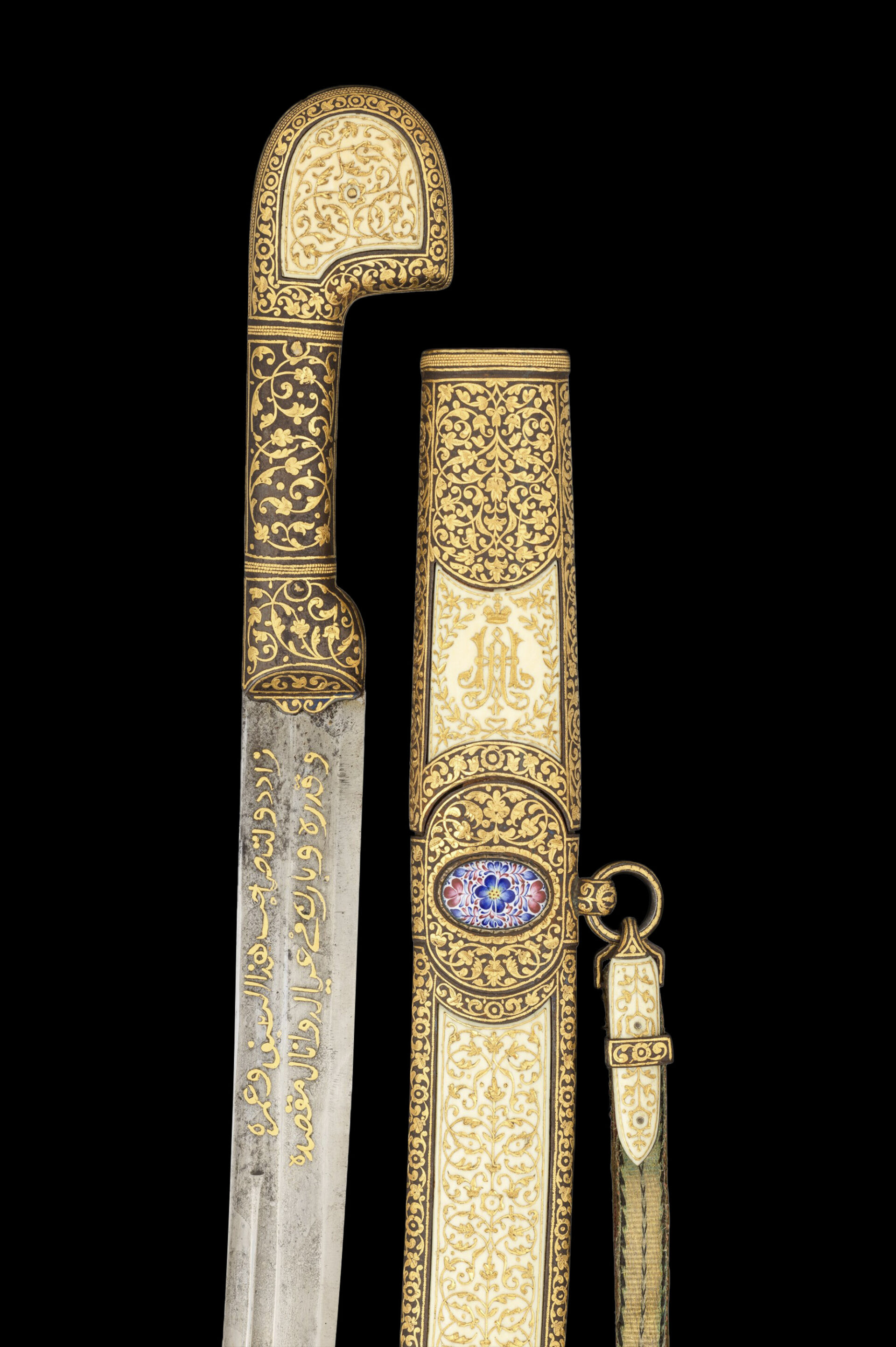 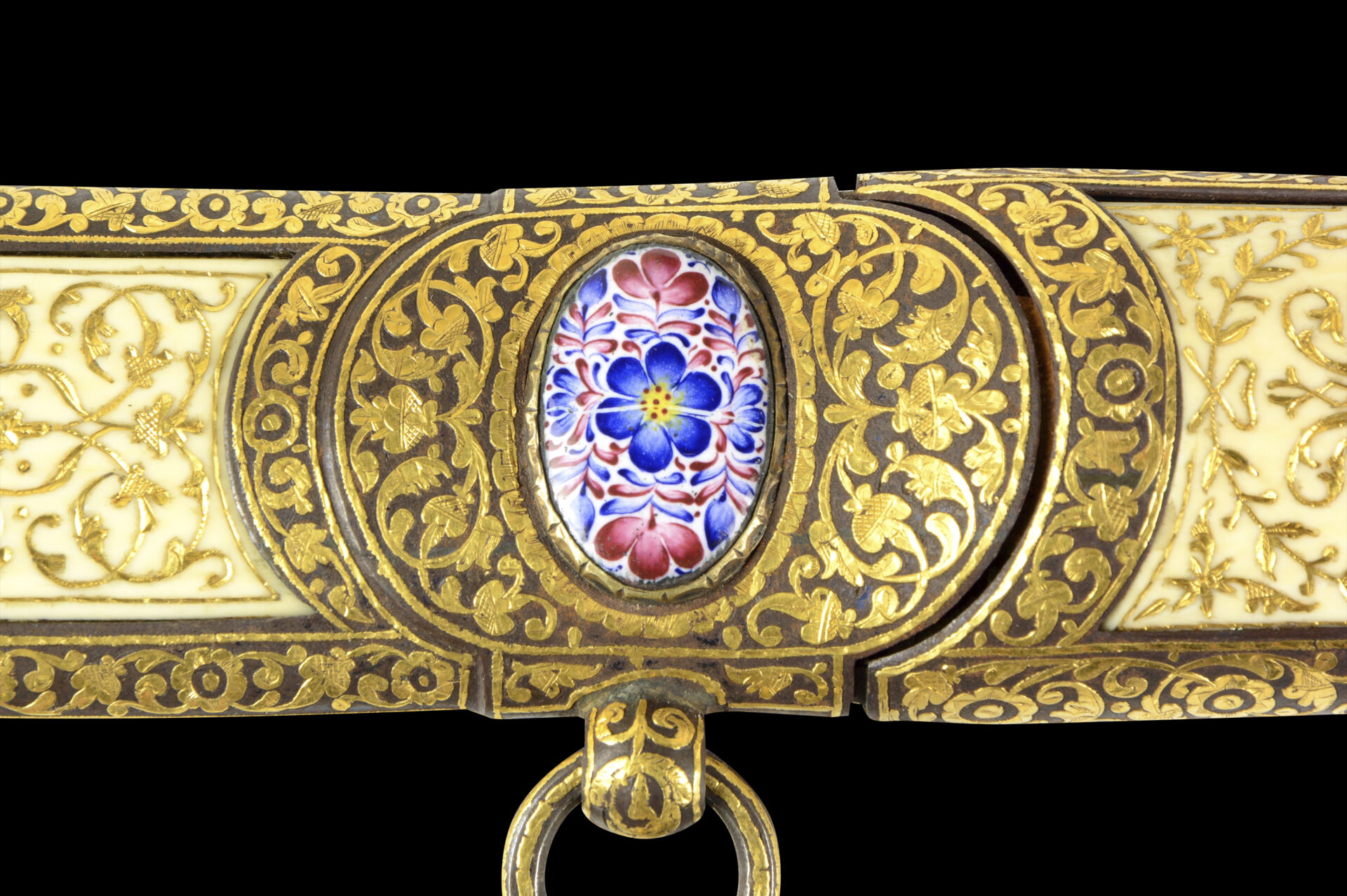 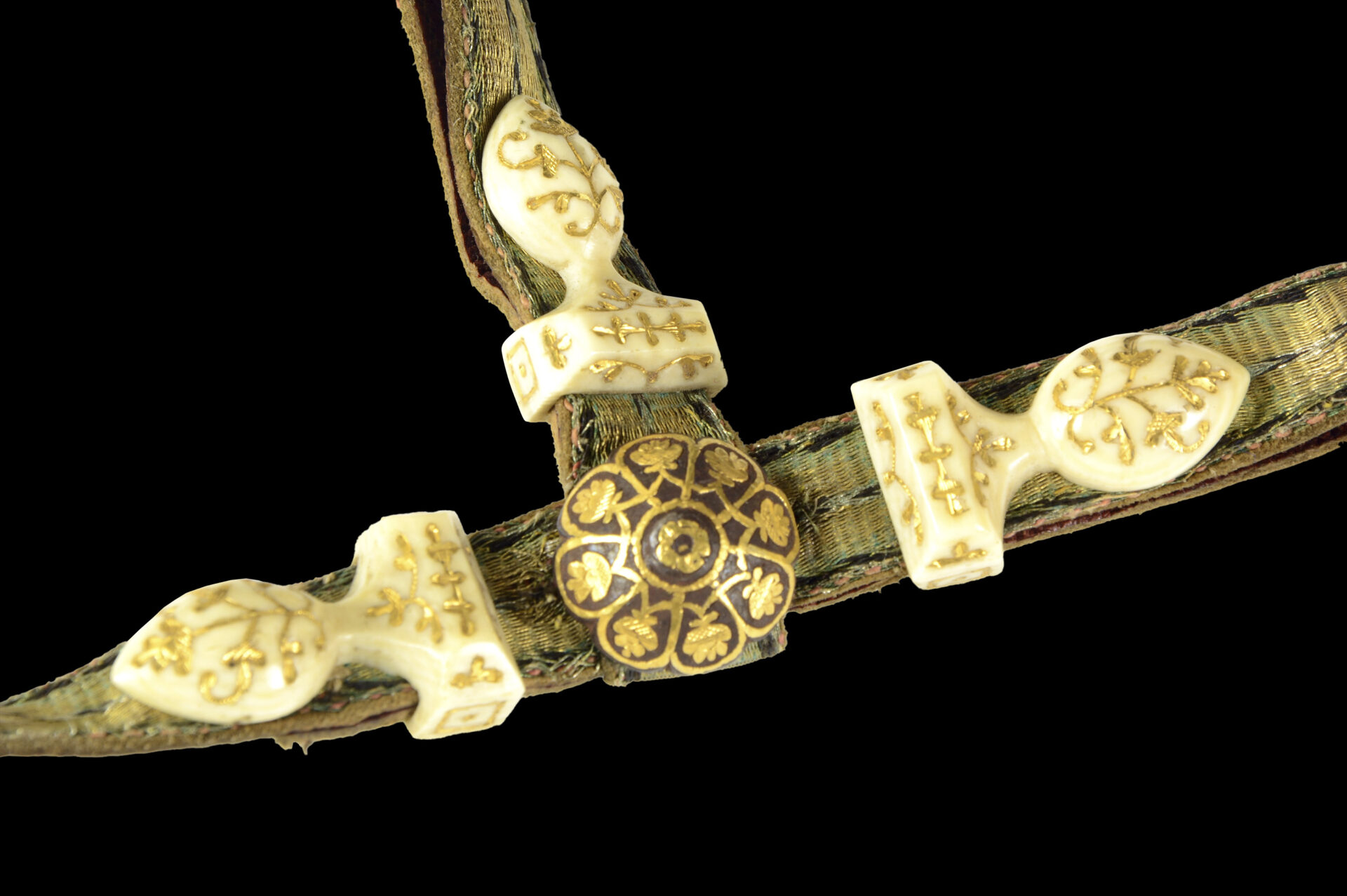 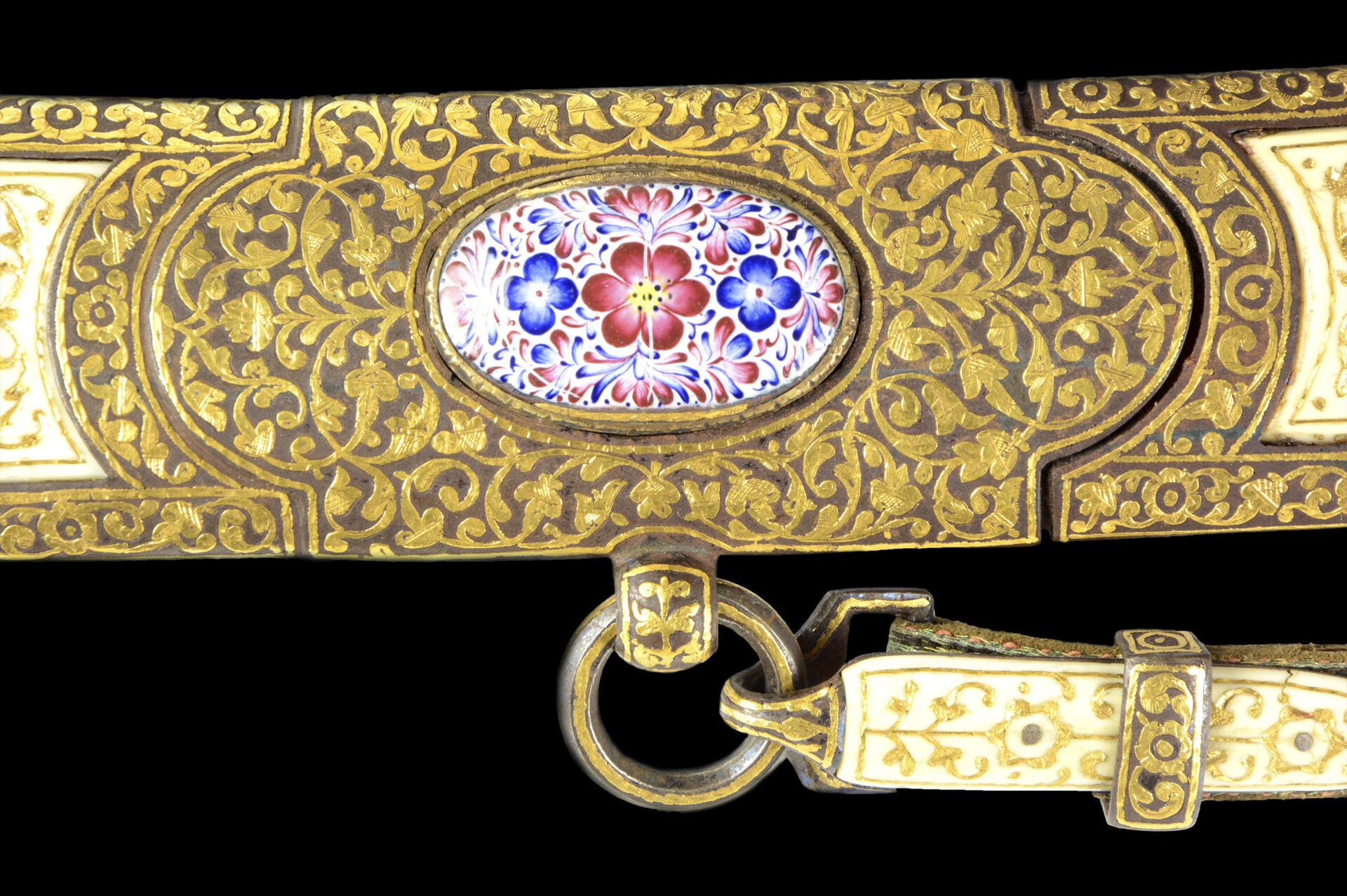 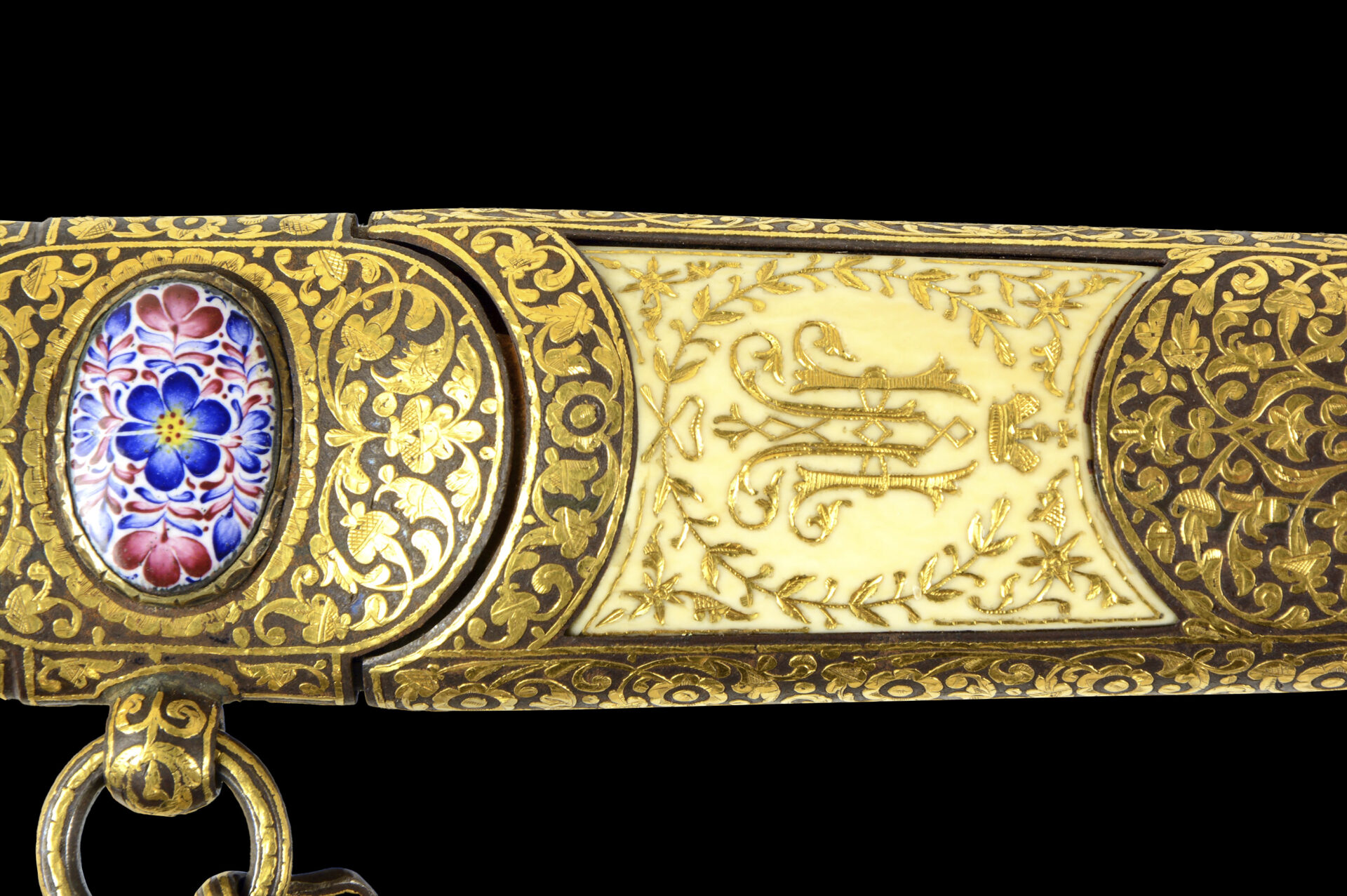 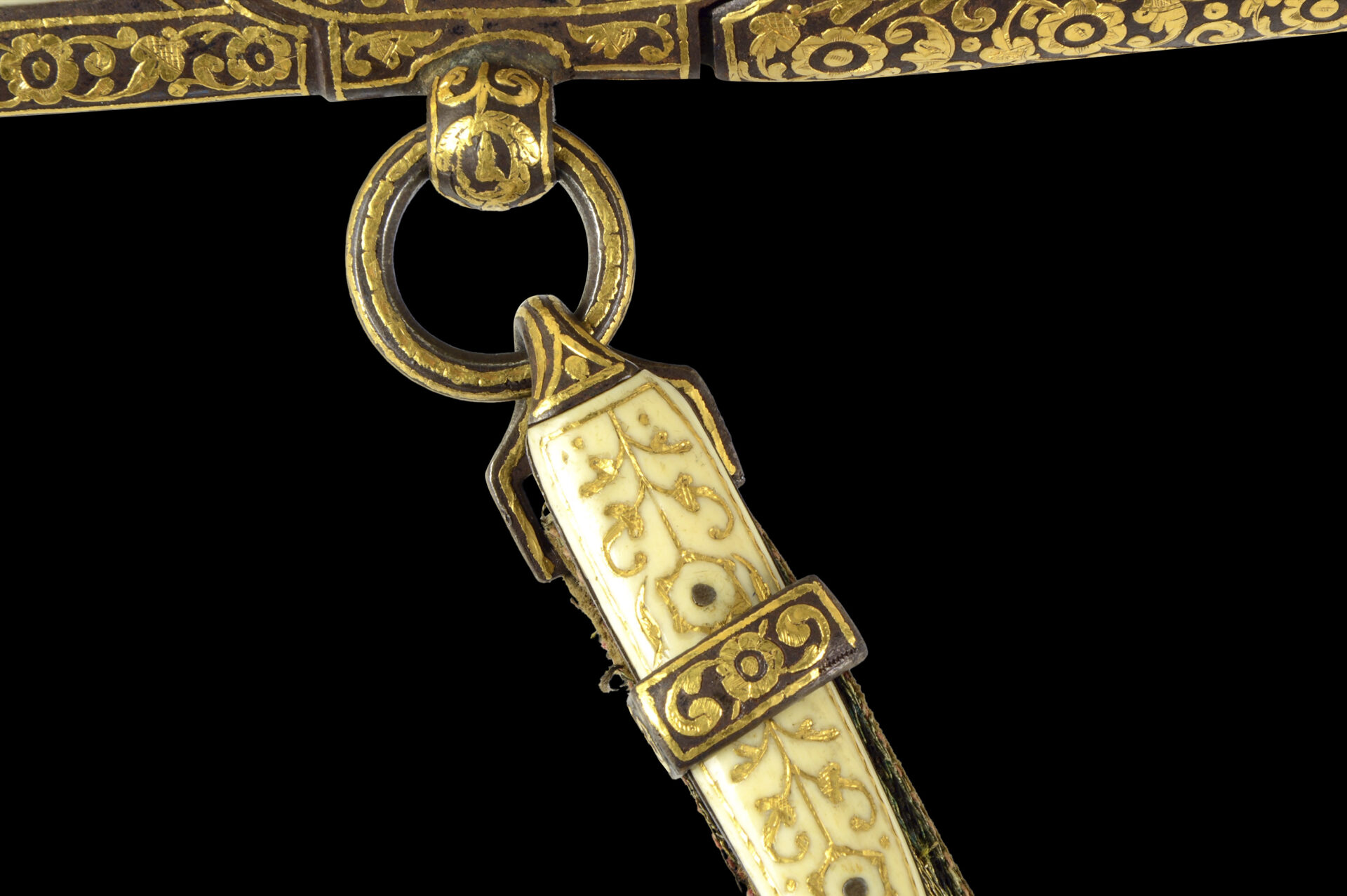 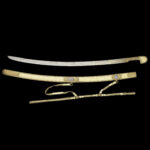 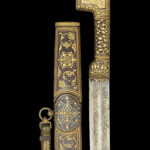 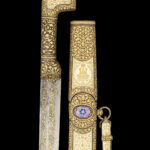 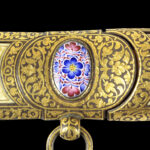 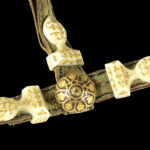 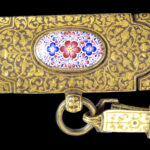 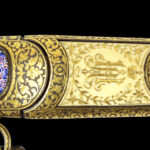 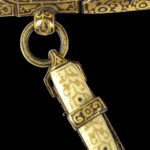 Was presented to him during Emperor Alexander III’s family visit to Caucasus in 1888.

On blade the couplets read: “zada dawlat sahib hadha al-sayf wa ‘umrahu / wa qadrahu wa baraka fi ‘iyalihi yawm fa-yawm” (“May the fortune and life of the owner of this sword increase / And his stature, and [God] bless his family every day.”) and “w’anala maqsad fi’l-’izz bi’l-farah w[a]’l-ghurur / wa ballaghahu ila darajat al-’ula” (“Grant him [his] goal in glory and in joy and pride, And make him attain the ranks of exaltedness.”)

On the top part of scabbard gold inlaid monogram in Cyrillic „HA” (NA in Latin). The crown on the monogram, according to the Russian heraldry (picture below), could be used only by the Emperor, Emperatrice or heir to the throne, what excludes possibility the saber was possessed by Russian duke or prince having initials NA or AN. As it’s not Emperor’s monogram (which all are well known), could be used only by two members of the Romanoff family – Nicolas II before coronation (Nicolai Alexandrevitch). The similar monogram we can found on various items which belonged to Nicolas II when he was Tsarevitch.

In the book by W.A. Potto (В.А. Потто), „Tsar’s family on Caucasus” („Царская семья на Кавказе”) printed in 1889, we can find descritpion of Alexander III family trip to Caucasus in 1888. There is a list of the presents given to Tsarevitch Nicolai Alexandrevitch by Ossetian people, including shashka.

Most probably shashka was sold in Western Europe (London?) in about 1920-30 by a member of Russian Tsarits family who emigrated from Russia after revolution. Later purchased by Peter Dunin de Skrzynno, member of an old Polish count’s family, which few members moved to Russia, served under Russian crown and some of them still live in Russia. Saber is in Dunin’s collection, now. Origin: Caucasus, Kubachi, Dagestan, Russian Empire, about 1880.

The quality of finish, materials used, balance of the weapon, very good blade used, limits the possible owner to Russian top-elites. Combination of the presence of Tsarevitch’s monogram and description in the book leaves no doubts that described shashka belonged to Nicolas II when he was the heir to the Russian throne. We can find it later in Eugene Mollo’s collection, presented in his book „Russian military swords 1881-1917” published in London in 1969, page 44.

A professional expertise of National Association of Weapons’ Experts of Russian Federation is enclosed.